So for my birthday, I asked for the ice cream maker attachment made by Kitchen Aid to accompany my mixer. At full capacity, it can make up to two quarts of any type of ice cream or sorbet or frozen treat. So being that I’m just me, myself and I, this sounded perfect. Who doesn’t want to take two quarts of ice cream to the face?!

The ice cream maker is $99.99 at retail value but can sometimes be seen on sale at places like Kohl’s in the home-goods section. Plus, Kohl’s almost ALWAYS has some type of promotion running which is how I got my attachment for $75 instead!

So the first time I used this machine, it was a complete disaster. It basically comes in three pieces- the mixing bowl, and two pieces that make up what’s called the dasher. One piece attaches to the top of the mixer (no matter the style of mixer you have) and it has jagged teeth facing down. Those teeth then line up with the other piece kind of like gears, and then will push against each other to churn. The other plastic piece with up-ward facing teeth looks like a square version of the paddle attachment. The major problem that I have with these pieces is that they’re made of plastic. PLASTIC? I wish they came as more durable pieces given that you could’ve paid $100 bucks for the attachment. 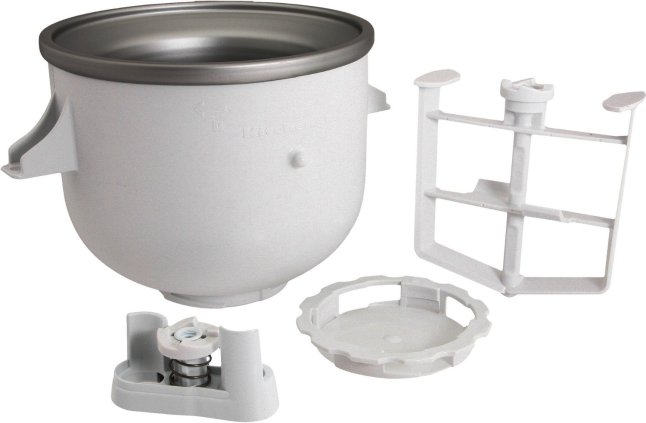 Here’s about how my horror story went down- I had frozen the bowl overnight in my freezer so that the liquid inside the bowl would be cold enough to help my sorbet form it’s ice crystals. When I was assembling the pieces, I was being very careful to read the directions and follow the instructions. HOWEVER, there weren’t any pictures and I suppose I didn’t understand how it worked… At last, I poured the liquid in which immediately began to freeze and flipped my mixer switch to the absolute lowest setting. However, something happened where the teeth weren’t lined up properly and the ground against each other causing the plastic to break and jam into the bowl!

So here I was, the mixer head locked and the pieces jammed below. There was no way for me to unlock the head of my mixer so I stuck my hands in the blueberry sugar juice (for blueberry sorbet) and stained my hands trying to un-jamb the pieces. After a minor panic attack and a 20 minute call to my mom, the pieces miraculously un-jambed themselves. I still have no idea how this happened but thank the lord.

So here I was, with broken plastic pieces and a dent in the mixing bowl of a present I had just gotten for my birthday and never officially used. What the fucking fuck!? Still on the phone with my mom, she told me to make sure that my mixer was also still working. So I plugged it back in and turned it on the lowest speed and IT DIDN’T FREAKING WORK. So NOT ONLY did my attachment break, but it also broke my $300 mixer!!! So I know that this sounds like a horrible equipment review, but I promise it has a happy ending.

I ended up calling customer service at Kitchen Aid and they replaced my ice cream attachment AND mixer for free. They sent me the new equipment in a pre-paid shipping box so I could send back my old mixer to be re-furbished by the company and then re-sold. They were quick, prompt and VERY polite. Probably one of the best customer service experiences I have ever had. So despite all the drama surrounding my first use of the equipment, I was ready to give it another go-around.

The first recipe I tried was their French Vanilla ice cream recipe which you can see below. YUM. It was so creamy and delicious and fatty and everything I want ice cream to be! Check it out!

1. Heat milk in a heavy based, non-stick saucepan, stirring often until very hot and without boiling or scorching milk. Transfer to a jug or bowl with a lip and set aside.

2. Whisk egg yolks and sugar together in a separate bowl.

3. Gradually add hot milk and vanilla and mix until well combined (called tempering!). Transfer mixture back to saucepan. Stirring constantly, cook for about 8-10 minutes over a very low heat until mixture thickens and lightly coats back the spatula (called nappe!). Mixture must not boil or it will curdle, however it will be quite hot and a little steamy. Be patient with this step do not rush making the custard.

4. Whisk in cream and refrigerate overnight!

6. Immediately remove ice cream to serving dishes or transfer to an airtight, sealed container and freeze for 4 hours or until frozen.

7. Remove ice cream for about 5 minutes before scooping. Homemade ice cream is harder than commercial ice cream so remove from freezer and allow to soften slightly.

I think I would give the Kitchen Aid Ice Cream Attachment 3.75 Abby stars. I’m not a fan of the plastic dasher pieces and that you cannot find their individual replacements online at sites like Amazon or Ebay in case only those pieces break or crack. I also don’t love that you have to freeze the bowl almost 24 hours in advance and if your freezer is as tightly packed as mine, you’ll have trouble making space for it. However, once I finally watched a helpful assembly video on YouTube, I had a blast making and eating my creations! I would also give Kitchen Aid Customer Service 5 stars for all of their help in this long and frustrating process. The ice cream is great to have if you want to WOW someone for dinner or if you’re just having a terrible day and need a large helping of the fruits of your labor.

What do you think? How many stars would you give the Kitchen Aid Ice Cream Maker Attachment? Let me know what you think of the recipes! Have a great weekend- stuff your beautiful faces for me! Next Tuesday will be another blog about my vacation in Myrtle Beach! So come back and check it out!