Oh guys… my life is so awkward. All of these crazy weird coincidences happen to me and I really don’t know how to explain it other than the fact that someone is probably recording my life for some new MTV prank war show or something.

So basically back in the winter, I started talking to a boy on Tinder who I’ll call Chris. I was interested initially because he said he was a cook and I could see that he went to CIA (Culinary Institute of America) which is the “rival” school of Johnson & Wales University where I attended. I sent some sort of comment saying how we might already be enemies since we went to rival schools to get the ball rolling.

Chris and I messaged occasionally on Tinder here and there. Sometimes he would take almost a week to respond to something I had said so I couldn’t quite gauge if there was any interest there. For me, the last straw came late one night when I got a message from him saying something along the lines, “If you need the D, you know where to find it”. And if you guys know from some of my other internet dating posts,I just don’t deal with shit like that. It makes me lose interest almost immediately. When I didn’t respond, I got another message the next day apologizing saying that his friend was the one who sent the message. Uh huh. Right, ok.

So eventually I deleted Chris because I lost interest. HERE’S THE KICKER GUYS. So a couple months ago, I got a call from the Taj Hotel saying that they had a position open and I ended up accepting a job there. Chris told me that he was working at the Taj so when I interviewed, I was nervous I would run into him and look like a complete creep when I really just wanted the job since it was a step in the right direction!

After staging and meeting the other pastry team members, there was YET ANOTHER TWIST. So Chris didn’t work at the Taj anymore (to my relief) but he’s roommates with one of my co-workers… EEK. Also at the time, another one of my co-workers was in a fight with him but I didn’t know under what pretenses. Were they dating and a couple? Were they just friends?! I definitely couldn’t tell them that I kind of knew him now!! SO AWKWARD.

One day, I finally chalked up the courage to talk to one of my co-workers and tell her how I was awkwardly connected to their world besides working with them. She was DYING when I was telling her that I knew Chris from Tinder despite never having met in person. All of a sudden, she GASPS and says, “OH MY GOD I REMEMBER YOU.”

What!? How could she remember me! Apparently Chris had shown Sarah, my co-worker, my profile and commented how he wasn’t sure of whether I wanted a job or a relationship… Well apparently I wanted the job more!! HA. She was telling me that they got really drunk together one night and showed her my profile… WAIT A SECOND. DIDN’T HE SAY THAT ‘A FRIEND’ SENT ME THAT GROSS MESSAGE?

It was Sarah!! Sarah was the one who wrote that to me the night they were drunk together, so Chris wasn’t lying to me! I couldn’t believe it. It was so incredibly funny and weird and “it’s a small world” coincidence and just too freaky. Who would’ve thought that all of our paths would cross in a city as large as Boston…

With this information in hand, they really wanted me to meet him when we would all get together and hang out, surprising him to see the look on his face. He had no idea that the “new girl Abby” was the same as “Abby from Tinder”. I was and still am so embarrassed about the whole situation but I thought it would be more comical than anything!

So as of this moment, I still haven’t met Chris face to face. I ended up tagging a picture of my co-workers on Facebook and through some Facebook creeping, he ended up finding my profile and texting Sarah this message: 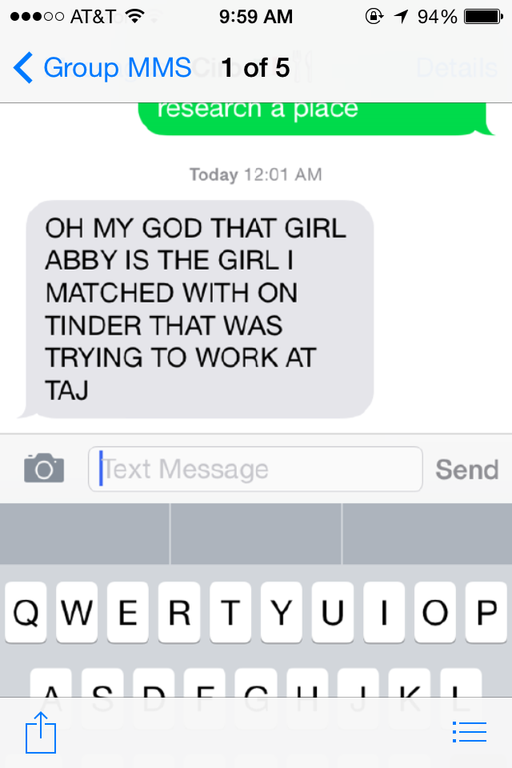 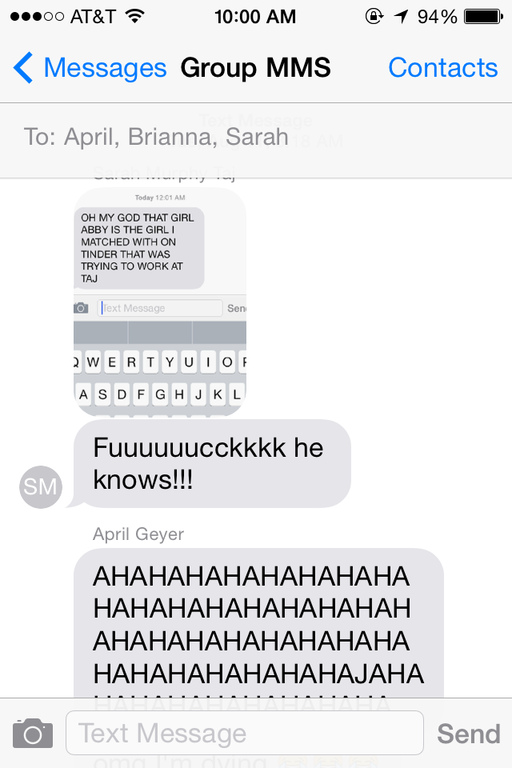 HAHAHA SO IT’S ALL RUINED NOW! My life is so weird.

Eeek awkward! Has anyone had any awkward run-ins or meetings or is it just me? Check back on Food for Thought Thursday where I interview my roommate Allie, who’s a manager at Shake Shack! It’s more than just burgers and fries! Thanks for reading!