I somehow lucked into having a Sunday off so of course, what’s the first thing I think of? BRUUUUUNCH.

I’ve been dying to try this restaurant in Brookline called Ribelle. They have this fantastic brunch menu so I couldn’t wait to go and try it out! I ended up showing up for a 12:30 reservation but my friend was running late so that gave me plenty of time to observe and chat up the staff. So, with it being brunch and all, I got a screwdriver while I was waiting to help the time pass, duh.

Then I commenced people watching! The bartender kept making old fashioned’s for these two guys, the waiters and hostess were all super friendly and attentive to their guests and there was also an open kitchen towards the back where a couple guys were plating up many of the hot dishes. I also perused the menu a bit and planned out what I wanted to try since everything sounded so good! 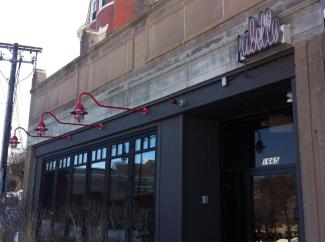 So lets dive into the food cause my mouth is watering just thinking about it. We sort of started our meal backwards by first ordering the cinnamon bun and polenta. We ate the polenta first because I knew I had to do savory before sweet. It was polenta with miso sweet potato preserves and prosciutto cotto!

The prosciutto was with maple syrup with complemented the polenta really well! The miso sweet potato preserves added a more savory component to the polenta but still had a bite to it from the miso! Next up was the CINNAMON BUNNNNNNNN

Then I was in a food coma but there’s no way I was stopping until the button burst off of my pants. Luckily we spaced some of the courses out by only ordering two at a time, so we had time to digest a bit. We also ordered the sesame rolls, which was probably something I wouldn’t have chosen to order because it came with a calibrian chile mayo and I’m such a BABY with spice and heat. I can’t handle itttttttt. But I figured I only do brunch every once in a blue moon so whyyyy the heck not!

Sesame buns with panelle. calibrian chile mayo and arugala! While the mayo definitely packed a punch, I still really enjoyed the sesame buns. And the panelle was pretty bomb dig too! Also, I didn’t really know what panelle was until I asked- its a chickpea fritter. I couldn’t eat my whole bun because my mouth was ON FIYAHHHH but I was looking forward to the last and final dish.

Bagel with smoked fish, tobiko cream cheese and radish. Just googled what tobiko was too (straight up, I thought they were some sort of poppy seeds when I was eating it) and they’re fish eggs. It was super mild though and I really appreciated the cream cheese after my mouth was practically melting off my face. I could only eat a couple bites since I couldn’t fit into my pants anymore. SUCH A GREAT EXPERIENCE!

We spent about two hours eating and lemme tell you, those two hours were bliss. Maybe I was brunch drunk love but I really had such a good time at Ribelle! I’d recommend it! And I look forward to going back for a different meal. I’ll just have to pinch my pennies in the meantime!

Does anyone else know of good places to eat in Boston? Or recommend anywhere I should add to my food bucket list?? I LOVE FOOOOOOOOOOD.